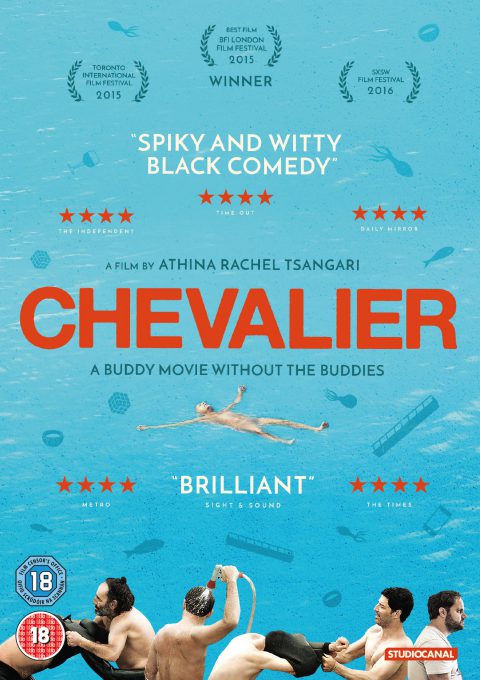 The previous film by director Athina Rachel Tsangari, Attenberg, featured a protagonist who was devoted to the films of David Attenborough, particularly those concerned with the courtship and mating habits of animals. It is perhaps no surprise that her latest film, Chevalier, bears some hallmarks of the natural history documentary, concerned as it is with the habits of a group of six, well-heeled men on a fishing trip aboard a chartered yacht somewhere off the Greek coast.

For these men, competition is everything and Tsangari adroitly captures the Alpha Male posturing that occurs as they show off among themselves. They jet ski, fish, dive until Yorgos (Panos Koronia) – a silverback, so to speak, among this troop of gorillas – suggests a new game, in which they will rate each other on various aspects of their lives; an almighty pissing competition for which the winner will receive a Chevalier signet ring. It will encompass everything from blood pressure readings to assembling IKEA shelves. One character delivers the deathless observation: “You syntax is shit and your penis is very, very small.”

Tsangari has taken a circuitous route to this, her third film. Athens-born, for a time she studied film in Austin, Texas, where she became friendly with Richard Linklater. She has designed for the stage and for the 2004 Athens Olympics, while her production credits include the brilliant, disturbing comedy, Dogtooth. She co-wrote Chevalier with Efthymis Filippou, writter of The Lobster. While Chevalier may not appear to have much in common with Dogtooth or The Lobster, nevertheless all three films are part of a wave of contemporary Greek cinema that is distinct and steadfastly unorthodox. As Tsangari provides laughs and uncomfortable observations about manhood, she also works in an underlying commentary on class and Greece’s financial crisis.