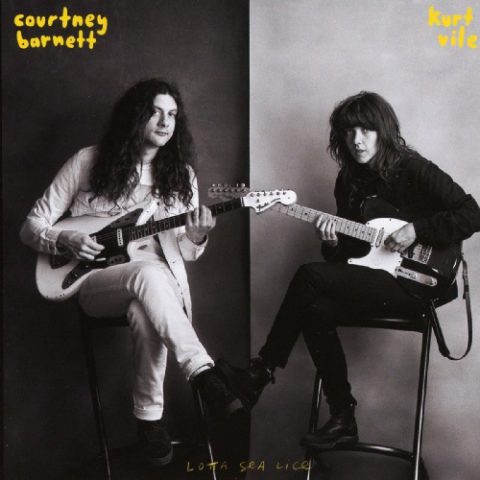 Considering they’re both saddled with the ‘slacker’ tag, Courtney Barnett and Kurt Vile have proven themselves to be seriously hard-workers, writing songs with considerable depth and intelligence, not to mention some ragged and glorious guitar chops.

Their first album as a duo is something of a dream for their fans with the interplay here revealing something new. Basically, Lotta Sea Lice allows them to relax, and that feeling is passed onto the listener, making this a perfect 45 minutes to drift away to.

Barnett and Vile mix new songs with covers, and they try out versions of their favourites by each other too: it’s not the grab-bag this suggests, though, with their take on Jen Cloher’s Fear Is Like A Forest a swampy, Neil Young-esque delight and their cover of Belly’s Untogether a woozy, country-rock gem. The Vile-sung cut of Outta The Woodwork, originally the opener on Barnett’s second EP, and the Australian’s solo version of Peepin’ Tom, are both well worth hearing, too, but the best things here are undoubtedly the original songs.

Opener Over Everything seems to mix up all that’s great about both Barnett and Vile, with the duo swapping both vocals and gnarled, gorgeous guitar solos across six and a half minutes. “When I’m outside in a real good mood,” sings Vile, “you could almost forget ’bout all the other things/Like the big ol’ ominous cloud in my periphery.” Meanwhile, on Let It Go, they detail the songwriting process over a star-spangled shuffle: “Eastern standard, open G/Trans-Pacific malady… You gotta let it go…”

“I cherish my intercontinental friendships,” the pair sing on the folky Continental Breakfast, and you’d be advised to treat Vile and Barnett’s similarly global partnership with the same approach.