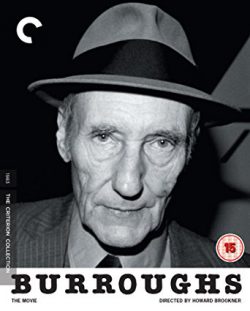 By the time of director Howard Brookner’s 1983 documentary, his subject – the author William Burroughs – was in his mid-sixties. Although the writings on which his reputation rested (provocative; experimental) had largely been undertaken during the 1960s, nevertheless he was enjoying renewed interest in his work. He had begun writing again – two of the books in his Red Night Trilogy had recently been published – and his stock was beginning to rise in the alt.community. A few years on from Brookner’s film, Burroughs would cameo in Gus Van Sant’s Drugstore Cowboy and collaborate with Kurt Cobain while David Cronenberg would film his key novel, The Naked Lunch. Thereafter came U2 videos and Nike TV commericals.

Brookner, however, caught Burroughs on a more intimate footing: as such, it is a brilliant, remarkable insight into the mind of a cultural icon. Brookner began the project in 1978, while still a film student at New York University, envisaging his film as a 20-minute short filmed at the Nova Convention – a happening organized in New York by Burroughs’ friends and admirers to celebrate the author’s return to America after living overseas for many years.

From there, Brookner built up a his subject’s trust, and continued to film him for the next five years. The result is a remarkably intimate and often moving documentary, during which Brookner follows Burroughs to his childhood home in the American Midwest, where his straight-laced brother, Mortimer, disparages his sibling’s achivements. Burroughs, too, opens up about in surprising detail about the death of his wife June Vollmer, who he shot in the head. We also meet Burroughs’ son, William Jr, who would die aged 33, in 1981, from alcoholism and liver failure.
Elswhere, a whirl of famous faces celebrate Burroughs’ alchemy: Patti Smith, Allen Ginsberg among them. Behind the camera on Brookner’s film are Tom DiCillo (camera) and Jim Jarmusch (sound), who were contemporary students with Brookner.

– New audio commentary by filmmaker Jim Jarmusch, who was a sound recordist on the film

– Thirty-minute experimental edit of the film from 1981 by inventor and photographer Robert E. Fulton III