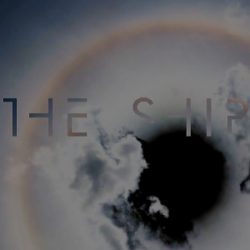 The casual listener might associate Brian Eno’s ambient work with the beatific, blissed-out stillness of 1978’s Ambient 1: Music For Airports; and yet, there’s always been a darker current running through the conceptual pioneer’s work. Take 1982’s Ambient 4: On Land, for example, and Lantern Marsh, brackish, overcast and churning.

Eno recaptures this moodier style on The Ship, his first proper solo album since 2012’s Lux (an atmospheric work which was itself something of a sister LP to Music For Air-ports). More significantly, The Ship sees Eno match his sonorous vocals to ambient tex-tures for the first time. The 21-minute title track opens the record with disembodied tones, before a hypnotic vocal line emerges, like some futuristic folk tune, from the deep. “We are as the undefined,” Eno intones, as distant speech gradually intrudes – a likely reference to avant-garde composer Gavin Bryars’ The Sinking Of The Titanic, first released on Eno’s own Obscure label in the mid-70s.

We enter more dystopian latitudes with the 18-minute Fickle Sun (i), where violent brass stabs echo Scott Walker’s apocalyptic work of the last few decades: “There’s no-one row-ing anymore,” Eno sings, “abandoned far from any shore.” Peter Serafinowicz appears on Fickle Sun (ii), sternly reading a computer-manipulated poem that hints at the horrors of the First World War, before a stately cover of The Velvet Underground’s I’m Set Free closes The Ship. Though it does break the gloomy atmosphere conjured up by the previ-ous 42 minutes, it’s a beautiful, uplifting version, with multi-tracked Enos in fine voice over gentle percussion, spangled guitar, ebbing synth pads and drifts of strings. It’s heartening to hear Brian Eno, after decades of making music, still breaking down his own barriers and creating such gripping, dramatic music.