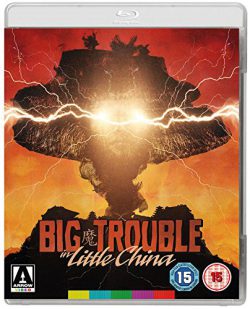 When one thinks of the great pairings of filmmaker and leading man – Ford and Wayne, Siegel and Eastwood, Scorsese and DeNiro, Coppola and Pacino, Allen and Allen – sadly John Carpenter and Kurt Russell’s collaborations are often rather overlooked. It’s a great pity, because the run of films they made together – Elvis (1979), Escape From New York (1981), The Thing (1982), Big Trouble In Little China (1986) and Escape From LA (1996) – are pulpy delights, far more inventive than their budgetary limitations permit.

Big Trouble In Little China is the last of the run of films they made during the 1980s that had started with sci fi, moved to horror and now, it transpired, settled on a centuries old mystical battle in San Francisco’s Chinatown. As ever, Russell was required to deliver dry one-liners while mayhem occurs. It works as a splendid double feature with Raiders Of The Lost Ark – another affectionate romp indebted to the same canon of b-movies and serials that Carpenter was inspired by – with Russell’s truck driver Jack Burton a good match for Harrison Ford’s Indiana Jones. The film is brilliantly hokum, of course: the fiancé of Barton’s best friend has been kidnapped by an ancient Japanese sorcerer, who intends to use her to break an ancient curse. There are monsters and Chinese street gangs, too.

Alas, at the time Big Trouble In Little China never quite replicated the success of Carpenter and Russell’s two previous collaborations – it was, in retrospect, too jokey, coming off the back of The Thing, which had really pushed the envelope for both director and actor. Nevertheless, it has an enduring cult cache, some priceless dialogue and, as ever, Russell is one of the most enjoyable action heroes to watch on screen.