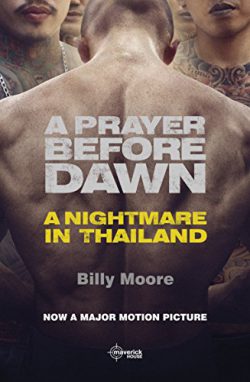 A Prayer Before Dawn will jolt you upright in your seat. It is a frenetic, shocking and fully immersive adaptation of the memoir of Billy Moore’s 3 years in a notorious Thai prison.

In 2007, Billy Moore was working as a boxer whilst selling methamphetamines on the side, until he was caught and sentenced to three years in jail.

Joe Cole takes on the central role and is utterly convincing as the small time crook thrown into anyone’s definition of hell. The tension will keep you on tenterhooks the entire time. There is very little English spoken in the entire film and this helps immerse the viewer into Moore’s world. You feel the same confusion as he does not understanding what is going on. The frenetic camera work leaves the viewer feeling as if they have been punched. So much of the story is told with non-verbal communication after all murder, rape and drug abusive need little explanation.

The success of the film is down to Jean-Stehane Sauvaure’s direction that elevates this biopic to above average. The viewer isn’t not sure he makes it and will even have thoughts of: why would you want to make it? As Churchill once reputedly said: “if you’re in hell just keep going”, and that’s what Billy Moore does. The viewer is left to marvel how and if he’ll survive the day unscathed much less his entire prison sentence. It is, we slowly learn, through Thai boxing and his friendship with a transgender prisoner, Fame, that give Moore something to live for. There are few tender moments in the film but, we are grateful for them as they provide a much needed respite from the horror of the jail. A Prayer Before Dawn will leave you pulsating long after you’ve left the cinema.