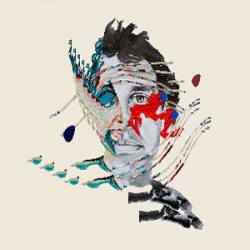 Over their 17 years together, Animal Collective have been many different beasts. They appeared playing warped acid-folk on 2000’s Spirit They’ve Gone Spirit They’ve Vanished, moved to damaged art-rock on 2005’s Feels, and later, on the acclaimed Merriweather Post Pavilion in 2009, they shifted into blissful, psychedelic electronic pop.

While 2012’s Centipede Hz saw them at their most awkward and noisy, Painting With is a return of sorts to Merriweather’s more inclusive charms. Recorded, like Merriweather, as a three-piece made up of Panda Bear (Noah Lennox), Avey Tare (Dave Portner) and Geologist (Brian Weitz), it’s a remarkably straightforward work for a group who normally revel in long periods of ambient synth wash – the Collective’s favourite effect, reverb, is notably toned down.

The 12 songs here are short and tightly structured: opener FloriDada blossoms from a bouncing intro into a sublime chorus lapped by oscillating synths, while On Delay pairs a bittersweet melody with a tropical pop gallop; one of the most impressive cuts is Golden Gal, which samples dialogue from The Golden Girls and cuts it to a slower beat and lovelorn vocals – “here for a while I will fol-low my golden gal,” Portner and Lennox sing.

While Painting With is undoubtedly a more concise, clean and welcoming listen than anything else Animal Collective have done before, it’s clearly not a compromise. Indeed, the trio can’t stop their more bizarre side from bursting out periodically; The Burglars switches chords frenetically, and John Cale turns up to add a drone to Hocus Pocus, while much of the record sounds almost as if it’s been sped up, its clattering beats racing to catch up with the syncopated, ADHD vocals. Busi-ness as (un)usual.