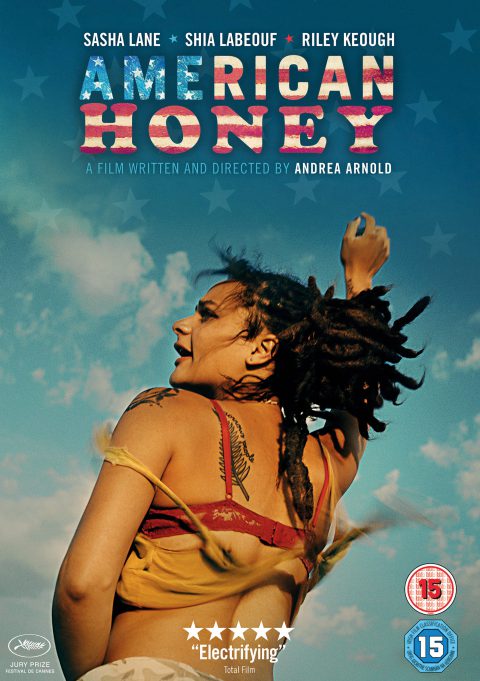 ‘American Honey’ is British filmmaker Andrea Arnold’s first film set outside the UK. Predominantly consisting of an unprofessional cast, the Road Movie won the Palme d’Or 2016 Jury Prize. It derives its name from a song by Country trio Lady Antebellum, which immediately signals the importance music and Americana play in the movie.

Star (Sasha Lane) has an extremely deprived home life enduring sexual assault and charged with the care of her younger siblings. Following a chance encounter with Jake (Shia LaBeouf) at Walmart she joins his young crew of travelling sales people on the Midwestern roads. Their adventure is presented in 4:3 aspect ratio to highlight close-ups, cinematographer Robbie Ryan treating the viewer to dynamic views and lush colours.

The Calvin Harris and Rihanna track ‘We Found Love’ serves as a leitmotif for the burgeoning relationship between the two principal characters Star and Jake; played once when they meet in a supermarket aisle and again when Star and her new friends are driving. Despite Jake recruiting Star, the boss of the outfit is his girlfriend Krystal (Elvis Presley’s granddaughter, Riley Keough). Krystal runs a tight ship, the only member of the crew to drive and sleep separately. We follow the friends as they spend their days using sob stories to sell magazine subscriptions and their nights partying.

Star escapes a grey life of no hope but in doing so finds herself living a nihilistic lifestyle with weak connections to the people around her. When she encounters a group of cowboys we witness an especially telling scene in which she manipulates men’s desires as a means of survival, a process she seems sadly familiar with. More broadly, the film is concerned with an erosion of empathy in modern life, the familiar trope of the American Dream and millennials’ failure to aspire to it. ‘American Honey’ is a sensitively handled rare naturalistic drama following the story of a young woman.