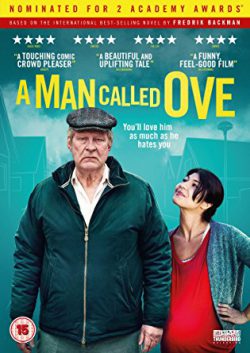 It’s had admittedly only a few entries so far, but there is a growing sub-genre of films devoted to difficult senior citizens. There was Jack Nicholson in Alexander Payne’s About Schmidt, Bruce Dern in Nebraska (Payne again) and Bill Murray in Theodore Melfi’s St Vincent; Nicholson will soon return from semi-retirement for a remake of Maren Ade’s sublime film, Toni Erdmann. It has recently been announced that Sweden’s A Man Called Ove will follow a similar path as Ade’s film with Tom hanks in the lead role; the foundations are solid enough here to survive a Transatlantic transfer.

A Man Called Ove stars Rolf Lassgard, the actor best known as the original Wallander, playing the perpetually weary Scandinavian detective in a film series that ran from 1994 to 2007. For director Hannes Holm, Lassgard plays Ove (pronounced OO-vair), a grumpy Swedish suburbanite who feels increasingly marginalised by circumstances. He is a recent widower, who also bears deep resentment for his successor as chair of the local neighbourhood watch scheme; at work, he is being edged towards retirement. As Ove sees it, there is only one way out of this: and much of Holm’s film, adapted from author Fredrik Backman’s novel, follows Ove’s various, unsuccessful efforts to end it all, which are largely frustrated by the inconvenience of his neighbours.

These suicide attempts provide an unlikely framework upon which Holm builds the story of Ove’s life, via flashbacks, specifically the tragedies that turned him into such a cantankerous presence. Many of these revolve around his beloved wife, Sonja (Ida Engvoll); a loss he clearly keenly feels. The film’s black comedy morphs into a more mainstream sentimentality, though, particularly through Ove’s growing – though reluctant – friendship with his new neighbour, Parvaneh (Bahar Pars), who gradually, predictably, draws him out of his shell to provide the companionship he has lacked since Sonja’s death.