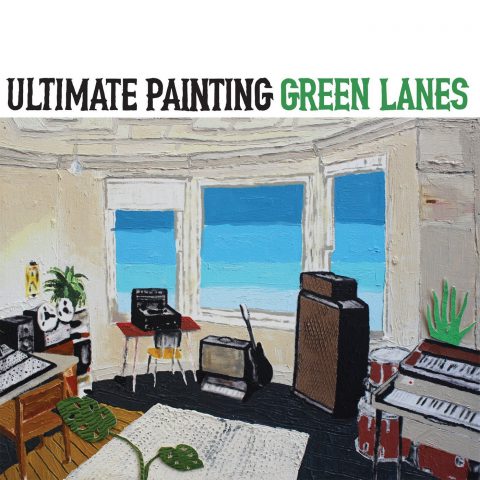 Green Lanes is the second album from London-based band Ultimate Painting. Formed as a loose collaboration by Jack Cooper (Mazes) & James Hoare (Veronica Falls) the project quickly turned into a full-fledged band in 2014 with the release of their debut album Trouble In Mind. That album received praise worldwide from NME, Pitchfork, Consequence of Sound & more. With Green Lanes the band is poised for more accolades.

The album is focused & cohesive, the result of two voices becoming one and each member’s songs complimenting the other, carving out a distinct & unified voice as Ultimate Painting. Slinking out of the gate, the first song Kodiak is a hummable future-classic with Cooper & Hoare’s guitars dancing around each other with ease. The licks & lyrics conjuring up images of Sixties California & Seventies New York; a picture of dark clouds on a sunny day. The rest of the album follows suit with the airy, lush harmonies of Sweet Chris & Two From The Vault and even kicks up some dust with the chooglin’ (I’ve Got The) Sanctioned Blues and the manic Woken By Noises.

While their debut was all Cooper & Hoare, this time out, they are augmented by the addition of their live drummer Neil Robinson who provides propulsion on all but one of Green Lanes’ tracks. The album artwork was once again provided by Portland artist Bradley Kerl, who portrayed Hoare’s London flat & recording space chock full of the equipment used to record both the band’s albums casually tumbling toward the viewer.

2015 sees the band hitting the road again, with appearances at UK & European Festivals as well as a full US tour in support of the album.