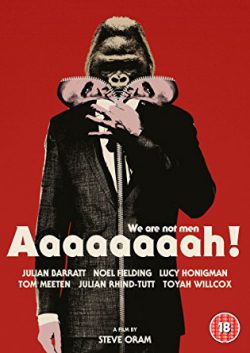 Sightseers star Steve Oram makes his directorial debut with social satire horror comedy Aaaaaaaah! The film depicts an alternate universe in which the world is populated by beings which look like people but behave like Apes. A dystopian 1970s soundtrack courtesy of King Crimson serves to bolder its status as a B movie style cult classic in the making.

With a shooting style appropriately reminiscent of nature documentaries, the film follows alpha male Smith (Oram) and beta male Keith (Tom Meeton) as they invade the territory of dominant male Ryan (Julian Rhind-Tutt). This East London home contains Barbara (Toyah Wilcox) and her children Og (Sean Reynard) and Denise (Lucy Honigman). Washing machine repairman Ryan has muscled in on the patch of previous patriarch Jupiter (Julian Barratt) who is living out his days in disgrace at the bottom of the garden. When his intentions towards Denise become obvious, Smith sets up a rivalry that can only end badly.

In the same way that George A Romero’s ‘Dawn of The Dead’ zombies return to the shopping mall remembering the habits of their everyday life, the humour here is derived from the aspects of these beasts’ similarity to humans, not their difference.

Julian Barrett provides a stand-out performance as the usurped patriarch, sleeping in bushes only venturing out to communicate with his daughter. He keeps a low profile, awaiting the opportunity to reclaim his throne. The knuckle dragging males account for most of the satirical moments, however there is a sense of despair at the how the women respond to their behaviour.
Eccentric and engaging, Oram manages to retain the viewer’s interest in the disturbing anthropomorphic theme whilst principally playing for laughs. Karma wins out in the end as the plot transitions into a tragedy about the fragility of power culminating in a generous helping of revenge. The message is clear; life is precarious, with danger always just round the corner.