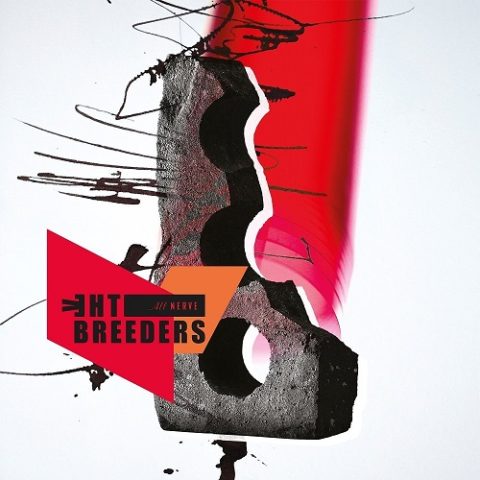 As her band return with the stunning All Nerve, Kim Deal dishes the dirt on the strange nature of The Breeders, their ’90s meltdown and why a new ukulele song could destroy the band. “People say, ‘What happened after Last Splash?’,” muses Deal, “and it’s kinda hard to say…”

When Fopp calls Kim Deal, she’s not at home in her provincial hometown of Dayton, Ohio, or out on tour. Instead, The Breeders’ lead singer, guitarist and songwriter is hanging out somewhere a little more exotic.

Each year, Deal comes down to the Sunshine State with her elderly father, but this year he decided not to go, leaving her with time to work out new songs on her four-track. She mentions a Christmas song she’s working on, then strums us a new track down the phone, a typically beautiful, bittersweet piece, but played on a ukelele given to her and sister Kelley Deal by Steve Albini after the pair sang at the producer’s wedding in Hawaii. “Josephine [Wiggs, bassist] would shoot me before she would actually play on a uke song,” she adds, “so that probably can’t be a Breeders song.”

We’re speaking to Kim Deal, however, about her previous batch of songs, which are being released on 2nd March as All Nerve, The Breeders’ first album for nine years and their first with the line-up that made 1993’s Last Splash – Kim, Kelley, Josephine and drummer Jim Macpherson – since, well, Last Splash.

“This is the classic line-up, I think that’s what people are calling it,” Deal says. “I’m ok with that, that’s the line-up people know, so that would be the classic line-up for them. What’s strange with The Breeders is it was always a revolving kind of line-up. I think bands are like that a lot now, but back then it was different. It’s like a sci-fi continuum!

“Pixies started with me and Charles and Joe hanging out – we even played with a different drummer for a while – but once we got David Lovering to play with us, and once we began playing shows out live and we had a label, it was always us, so there was no idea of line-up changes or anything like that through the entire time. [But] to have a good relationship and be able to play with all these different musicians [in The Breeders] is really different. It’s funny, I’m still in touch with all the people I’ve played with in Breeders, from Britt Walford, who I still play with on solo stuff, to Tanya [Donnelly], she comes up onstage and plays, and Mando [Lopez], he’s playing full-time with Morrissey, but he plays on the solo stuff, and Jose [Medeles] was on some of the solo stuff too – so it’s interesting that I still have a good relationship with all of them.”

Perhaps the only Breeders member that Deal was estranged from was Last Splash drummer Jim Macpherson. After the group disintegrated in the mid-’90s, Deal and Macpherson went on to form The Amps, an ethanolic, garagey group that released one record, Pacer, in October 1995; a few years later, they split in a haze of drink and bad behaviour, and the pair wouldn’t talk until the ‘classic’ line-up reunited in late 2012.

“We played together until ’98,” remembers Deal. “But Jim says he then called me to say he was quitting or something like that, or he was taking his drums or something like that – I don’t remember. But that’s one of the great things about being back together right now, and doing this, is being able to have Jim back. His kid comes over and shovels the snow for my elderly parents if we’re not in town to help. My mom and dad went to his house and helped them wallpaper in the ’90s!”

The Breeders are certainly a close family, with Kim, Kelley and Jim still living in Dayton, Ohio, and Josephine coming over every month or so from New York City. The group hang out, watch football and baseball and have BBQs – when they can fit it in around their social schedule, they retire to Kim’s basement, full of broken four-tracks, where they put together the 11 songs that make up All Nerve. The reasons why the quartet drifted apart in the first place are hard to discern, especially for the band members, although drugs, fame, alcohol and a lack of communication seem to be at the core of their breakup.

“People say, ‘What happened after Last Splash?’,” says Deal, “and it’s kinda hard to say. There’s a Kurosawa movie called Rashomon, and the movie is about the same set of events, but it’s looking at those events through individuals’ different perspectives. So we realised this is The Breeders’ Rashomon movie, where each person tells how it ended for them. And as Kelley points out, in each of our stories, we’re our own hero.

“But then I began to resent it [on this press tour],” she jokes, “because it was like, ‘No, that’s not what happened… Why should I give them voice for their grotesquely bent recollection of the actual story where they’re the hero?’”

Despite their messy past and a protracted recording process, the stunning All Nerve is probably the band’s finest album – deeply Breeders to its core, it’s compact, tightly wound, catchy, weird and beautiful all at the same time, with Dawn: Making An Effort a gorgeous ambient rush, MetaGoth a propulsive, dark groove track and Skinhead #2 a powerful, post-hardcore sugar-rush.

Most of the songs were written over the last few years – some, like MetaGoth, collectively – but others stem from Kim Deal’s distant past. “I was singing Nervous Mary in the shower in the ’80s,” she explains, “so it really goes back to that. It literally took me 30 years to write that… I never tried to write that song, things just grow on me and bloom in my head.

“Walking With A Killer was the first song from my solo seven-inch series, and that was out like 1 January, 2012. And Wait In The Car – in the 2000s Richard Presley from the East LA gang of The Breeders, he brought that to rehearsals, and we were playing that in ’06, or maybe ’04 or ’03?”

Recording for All Nerve took place at a number of different studios, including Steve Albini’s Electrical Audio in Chicago, but most of it was tracked at guitar tech Mike Montgomery’s analogue Candyland in Kentucky. “Josephine and Kelley love digital,” says Deal, “and analogue’s too expensive for them. So we went to a digital studio in Dayton [first], and we did get one song out of that, because there were hardly any drums on it. But I was able to say, ‘Drums on digital is not flying for me.’”

The band compromised by mixing the album digitally on ProTools, a first for analogue purist Kim Deal. Now, as they prepare to head out on an extensive world tour later this year, they’re dealing with even more digital technology: “I think we’re going to have to use stems onstage for Spacewoman,” says Kim. “Bradford Cox from Deerhunter helped me pick the sampler out and he helped me load some things when I was needing them. We’ve loaded the [synth] noise from Off You, because we can’t take bass pedals out on tour with us, because the shaking just breaks gear.”

With an incredible album to promote, The Breeders have a busy schedule ahead of them. There are no plans for the future after All Nerve, though, but Kim is adamant that this line-up is an ongoing project, not just a temporary reunion.

“Unless Josephine and Kelley bail,” she laughs, “and me and Jim continue on and get drunk and get mad at each other and not talk to each other for another 15 years… That’s what happened last time, so we’ll see if that happens again!”

All Nerve is out on 2nd March on 4AD