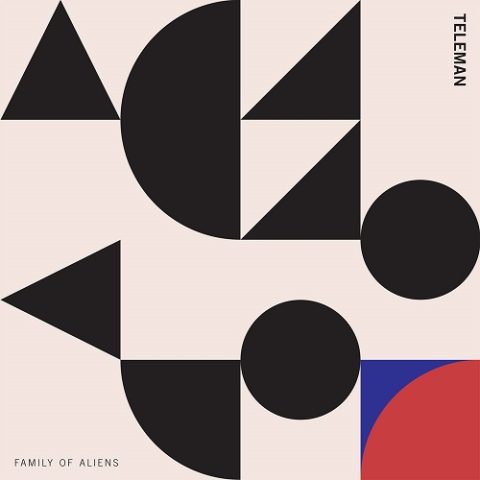 “Everything we were doing was based around, ‘Are we having fun?’”

Teleman are snatching success from the jaws of defeat, fighting the music industry, London and their solitary tendencies with album number three, Family Of Aliens. Singer and guitarist Thomas Sanders discusses being bored with guitars, controversial Vocoders and late nights in the studio. “I don’t want it to be, ‘Ooh, look at us, we’ve got a new sound, a new direction’…”

Being in a band is all fun and games – a way to prolong your adolescence, without responsibilities or worries. Right? Well, Teleman reckon otherwise.

“Having a band sometimes feels like quite a big burden,” says Thomas Sanders, singer, guitar player and chief songwriter. “You’ve got to be able to write the songs… you should really be able to record them to a really good level, that helps as well, then take yourself out on tour – there’s a lot to do. And social media, but I’m not very good at that…”

Over the last half-decade, though, Teleman have channeled their work ethic into some sublime indie art-pop. Despite the efforts they clearly go to, their new record Family Of Aliens sounds effortless and breezy, from the Vocoder-led Submarine Life to the chunky synth groove of Cactus and the infectious riffs of Twisted Heart.

That they’ve become so beloved over the course of their two previous albums to date, 2014’s Breakfast and 2016’s Brilliant Sanity, is a testament to the quality of their songs – for there are no gimmicks or tricks in the Teleman sound.

“It’s organic,” explains Sanders of the band’s process. “There are four of us and we’ve all got slightly different leanings and we all push and pull in different directions. What ties all of the albums together are these fairly simple melodies.”

The new album demonstrates a subtle change in the band’s sound, though, with more electronic elements and keyboards replacing Sanders’ electric guitar. “I think it’s just wanting to push ourselves and expand our boundaries and just enjoy ourselves more,” he says. “I’m pretty bored of playing guitar, to be honest, it doesn’t really excite me very much. It only does one thing, it’s only got six strings, you know? But I don’t want it to be, ‘Ooh, look at us, we’ve got a new sound, a new direction’!”

To create the wide range of sounds on Family Of Aliens – from the piano balladry of Always Dreaming to the minor-key pop of Fun Destruction – Sanders, normally the sole writer, enlisted his bandmates to rework many of his early ideas.

“I struggled working with people,” he explains. “Once I started an idea I wanted to see it through to the end on my own. I really enjoy it, so I’d get lost in it and before I knew it I’d have finished the song, structure, instrumentation, everything, and then I’m a little bit precious about it. [But] I’m learning to collaborate, and it’s much better, I think. I basically made a load of demos, and sent them to the rest of the band, and Pete [Cattermoul, bass] asked if he could have the sessions so he could take them home. Pete and Hiro [Amamiya, drums] did their own reworkings, reimaginings, of these songs that I’d done, and some of them turned out to be brilliant. Cactus was the main one, there was a lot of heavy bass guitar and distorted guitar on my demo, and then it changed to that synth line and it sounded a lot cooler.”

Submarine Life, similarly, began as a one-minute demo by Sanders, then he and Cattermoul developed the idea into a longer, ambitious piece. “The Vocoder set the tone of the song straight away,” says Sanders. “A lot of people don’t like that, though – ‘Oh, I wish I could hear your voice properly instead of that stupid Vocoder’, but I think sometimes it’s good to polarize people and challenge their expectations. You don’t want to keep doing the same thing over and over again. Working on this track with Pete was the time when we realised that we worked really well together,” he laughs, “which is a strange thing to say after working together for all these years.”

The duo, along with keyboard and synth player Jonny Sanders, were all previously members of Reading guitar group Pete & The Pirates, until that outfit split in 2012. So when the Pirates only managed two LPs, does reaching a third album with Teleman feel like an achievement?

“It does feel like a milestone, yeah,” says Sanders. “It’s great to have got this far – and I’ve got a strong feeling there’ll be a fourth and a fifth too.”

The group all live and rehearse in north-east London, but their singer has some advice for younger bands eager to get to the Big Smoke and ‘make it’. “I hate it – I’m really sick of London,” he admits. “I don’t wanna sound like a London basher, but it’s getting increasingly difficult to work there. The area I live in is getting busier and busier all the time, in the day and in the night. It’s very difficult to be a musician in London – we moved there because we thought it would make our lives easier, but it really doesn’t. If anyone’s thinking of moving to London because they think it’ll be good for their band, I wouldn’t do it!”

Putting up with the high rents, the noise and the hassle of being a band in London is clearly something Teleman are prepared to do, though. Family Of Aliens was tracked in relatively relaxed style at producer (and Boxed In man) Oli Bayston’s Hackney studio, Flesh & Bone. Brilliant Sanity was recorded mostly live in intense sessions with Dan Carey, but the band made sure that they had fun with the making of their third album. Backing up Sanders’ comments about the difficulties of being a musician in London, Flesh & Bone Studios was turned into luxury flats not long after they completed recording the album.

“It felt like everything we were doing was based around, ‘Are we having fun?’” says Sanders, “so there was this great sense of exploration. It didn’t feel restricted to a particular template, which I think shows in the record. We let our hair down, had some late nights, and it all just came together in a very natural way.”

Always Dreaming, a hypnotic piano ballad, almost wrote itself, according to the singer, while the title track takes Krautrock’s motorik pulse and bolts it to a charmingly low-key slice of dark pop that echoes Sparks and The B52s. Listening to the record’s 11 songs, there’s a sense that the quartet could turn their hand at any style and it would come out bearing the aural Teleman watermark.

“I often wonder what does make us Teleman,” agrees Sanders, “what is our essence. If you could boil it down, what would it be? I’m not really sure. I really love a simple, pure melody. I don’t like to always be very predictable with chord progressions and timings. I really like the craft of writing a pop song, I find it quite satisfying and addictive, but I always want to temper the pop aesthetic with something either beautiful or interesting. I never just want to be pop for the sake of pop. It means many avenues are open to us and I hope we explore them all.”

“Well, maybe not death metal or drum and bass.”