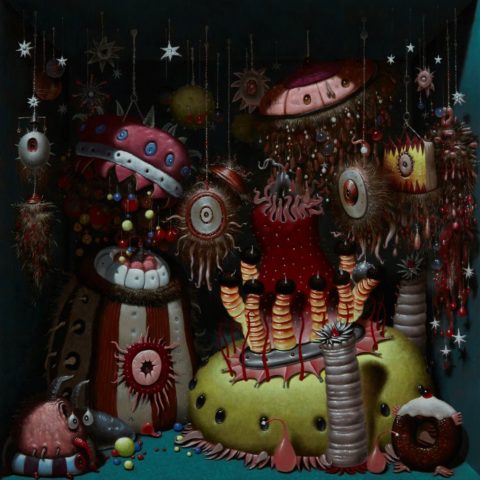 “I score the modern world”

Half a decade after they split “for the final time”, Orbital are returning with a new album and a renewed sense of purpose. As Paul Hartnoll tells Tom Pinnock, the duo have big things on the brain – Brexit, the modern world and the death of the universe… “‘Bleak Britain… what have we got to look forward to?’”

“I feel like this is where I’m supposed to be,” says Paul Hartnoll. “It’s like, ‘What are you doing mucking about with other things, falling out with your brother and not using the Orbital name to explore your creativity and artistic flair?’ It just seems silly.”

Brothers being brothers, Orbital have now split twice. Hartnoll reunited with his brother, Phil, for live work last year, though, and now the pair are returning with their excellent ninth album, Monsters Exist. We can expect more music in the future too, now that the pair have a pact not to break up again like they did in 2004 and 2014.

“Absolutely! The key thing is to not stop talking when you’ve got problems. Why did we split? It’s really hard to describe in one sentence… I thought [Phil] was a dick! Sorry, I couldn’t resist that! We had different work ethics, he’s a party boy and I’m not. It becomes very wearing on the soul when you’re in a business partnership with someone who likes to party when you’re trying to be sensible and get on with it. It puts a strain on things. But I don’t care anymore – I’ve made my peace with him being a party man.”

The brothers’ new album, their first since 2012’s Wonky, is possibly their strongest since In Sides (1996), and it incidentally features artwork from that album’s cover artist, John Greenwood. In many ways, it’s an album about conflict – but not within the band. Indeed, Paul Hartnoll put the majority of it together in just a few months at the end of last year, at the band’s studio in a “crumbling” building in Brighton, using a huge range of equipment from the vintage Putney synth to Ableton Live and the latest plugins.

“I feel energetic at the moment,” he explains. “It was a very quick album to make, this one – there were a lot of bits and pieces and ideas that I had in the bag already. We got the track Monsters Exist and thought, ‘Ok, that’s a really good start’, and then everything else just fell into place.

“Different tracks work in different ways. A track like Tiny Foldable Cities, I started it and then Phil came in and said, ‘I like that’, and we sat down and had a really nice day in the studio, and he added a couple of lines to the top of it and it was all good fun. Sometimes I write and he comes in on the last day and we’ll co-produce it and put it together.

Like many artists creating today, it was hard for Hartnoll to ignore the political and social problems unfolding across the world while he made Monsters Exist. But rather than staging a protest against the politicians he detests, he’s chosen to reflect the madness of our present in some of Orbital’s most out-there music yet.

“I write a soundtrack rather than a protest song,” he says. “I score the modern world. It could be a score for my inward life or my outward life, but on this album it’s a bit of both really. There are very pointed feelings in the track PHUK – I told someone that we were trying to reflect the modern world, and he came in when we were mixing that song and said, ‘What? This is what you think the world sounds like?!’ And I was like, ‘Yeah, I see your point…’

“But for me, [the song is] almost hysterical, it’s like, ‘Lalalala, let’s all walk off a cliff of Brexit, it’s gonna be fine…’ You fucking idiots. Then you get the more poignant, thoughtful moments [on the album] where it’s like, ‘Bleak Britain… what have we got to look forward to?’

“For our part of the world, the last big youth movement was rave,” he adds. “One thing we did have was a Californian hippie attitude where we didn’t like what the government was doing so we just did our own thing, lived the life we wanted rather than trying to fight the system. And they don’t fucking like it! That really scared them; we saw that with the Criminal Justice Bill.”

With the Hartnolls being children of the rave movement and long influenced by the radical politics of squat-punk, the targets of their ire are unsurprising. Paul is so understandably angry about Brexit and the mistruths told by some parties that he apologises for a tirade of bad language.

“I should stop swearing,” he laughs. “But I think even people who voted for Brexit have started to realise now. I do appreciate how hoodwinked they all were – I mean, you can’t expect people to suddenly get up to speed with politics. The government are completely washing their hands of it too, by every time they mention Brexit mentioning ‘the will of the people’ – that is one big fat buck being passed on, so when it hits the fan they can say, ‘Well, we just did it because it was the will of the people… nothing to do with us.’ It’s so transparent.”

Although the foreboding industrial textures of The Raid and Monsters Exist channel the fury that the Hartnolls feel, the album isn’t all doom and gloom. Hoo Hoo Ha Ha is in many ways the most joyful track Orbital have ever produced, but it’s an unhinged, grotesque kind of joy, hovering close to mania: like “a scary funfair”, says Hartnoll. Then there’s the closing track, There Will Come A Time, featuring a scientific soliloquy about the death of the universe from Professor Brian Cox. With its twinkling ambient synths and muted drums, it’s a moving coda to the despair and madness that’s just come before.

“It felt like my opportunity to do a modern version of The Hitchhiker’s Guide To The Galaxy!” says Hartnoll. “That’s one of the biggest influences on me, as a non-piece of music audio. I loved it. And that’s what it was like, putting all this music under Brian Cox, as if he was the Book in The Hitchhiker’s Guide.

“In a funny kind of way, [this album is] talking about the petty squabbles of the idiots, the narcissists, the monsters, the people grabbing power, and then Brian says, ‘Look people, have a look at this, this is what it’s really about. Why don’t you just calm down and love each other, because we haven’t got long…’ It’s that awareness of mortality – if you’re aware all the time that you’re about to die, you live your life truly and properly. For some people it’s a real paradox, because if they think about death they get upset, but for me it’s awesome – ‘Fuck, I’m gonna die, I’d better do everything I can in my power to enjoy myself, be with and look after the people you need to look after, and get on with it!’”

If that means more music from Orbital, then all the better.

Monsters Exist is out on 14 September on ACP