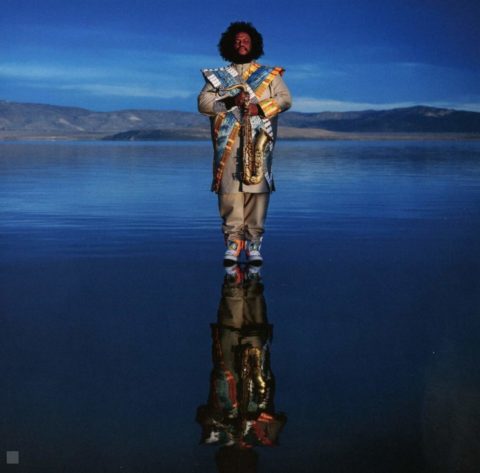 “Your imagination affects your reality”

Kamasi Washington takes us inside his wild year – from creating one of the finest (and longest) records of 2018 and rejuvenating jazz, to working on brand new material and leaving smaller stages behind. “It’s interesting,” he tells Tom Pinnock. “I’ve always lived that double life…”

Kamasi Washington is talking to us about his hectic year, and his stunning list-topping album, Heaven And Earth. The Californian composer, bandleader and saxophonist is over the moon about the reception the record has received, but he’s not surprised; after all, he’s seen jazz reborn as a mainstream force in recent years.

“It feels now like what people want is just good music – not [specifically] loud or fast or hard music, or this or that, they just want good music.

“You never really know,” he adds, discussing the reaction to his last album, “I mean, I liked it so I thought people would like it, haha! But that’s the thing about making anything, you try and make it the best you can, but then you kinda have to let go and people will either get it or they won’t, you know?”

As modest as Washington can sometimes seem, his music has certainly been as important as any other in opening people’s minds over the last few years. After years of self-releases, and live and session work (he popped up on Ryan Adams’ New York, New York back in 2000, performed with Lauryn Hill and Snoop Dogg and has recorded with Kendrick Lamar), in 2015 he released The Epic, an aptly titled collection of 17 mighty, extended pieces featuring fellow leading lights of contemporary jazz including Thundercat, Brandon Coleman and Miles Mosley. A more accessible EP, Harmony Of Difference, appeared in 2017, before this year’s Heaven And Earth brought more acclaim, and tipped Washington over into playing larger venues – the kind of places that don’t normally see hard-funk horn improv and spiritual, orchestral soul.

“Jazz is such a wide, big thing,” he explains, “but somehow in the past the general perception of people who didn’t really listen to jazz was that it was old men playing a bunch of old music, very softly. But behind the veil there was jazz being infused into all the music they were listening to – hip-hop, R&B, rock’n’roll… Now people are starting to realise how much music is covered by that small four-letter word.”

Kamasi Washington has spent much of his life in Los Angeles, a fertile breeding ground for jazz, soul and funk. Success, however, has taken him away from his hometown, especially this year.

“I’ve never been gone this much, probably my whole life,” he says. “So for the first time I feel a little bit displaced in LA, sometimes. It’s still fertile, I just don’t always know where the trees are growing, you know? So when I’m home I try to get back out and get back into the scene and maybe try to tap back in. Because I feel like there’s always so much great music and great musicians living here.”

Washington is back in LA when we speak, his headline tours at an end for 2018, but he’s hardly resting, and is preparing to head to Europe for shows as part of trombonist Ryan Porter’s band. “I’ll be just playing,” he protests. “It’s a little easier when you don’t have to steer the ship.”

A packed schedule doesn’t mean Washington will be taking a break from writing, either; he’s got used to composing music on the road, whether on the bus or backstage at venues, during soundcheck or in hotel rooms.

“A tour bus is not the most advantageous place to write music, but in the end it creates its own thing – all the chaos, people running back and forth, the bus moving and people playing video games and smoking and everything else happening all around you. To find your centre in that creates a different kind of energy, so I’ve learned to tap into the energy that I’m in wherever I’m at, and to be able to go, ‘OK, I’m gonna write something today no matter where I’m at, or what my situation is’, so that creates its own interesting possibilities.”

Washington admits that he writes a lot of material, and indeed, he started composing what became Heaven And Earth well before he had an overarching plan for the album. What he was coming up with was soon easily separated in two, though, each diverse half stretching across a CD (or two LPs). Fists Of Fury, then, opens the Earth side with an extended take on the militant kung fu theme, while the Heaven side begins with a lush journey into the cosmos, The Space Travelers Lullaby.

“I realised what the album to me was supposed to be about, this discovery of two sides of reality, one being what’s in your mind and the other being what’s coming into your mind.

“Those are the two sides of reality that I’m dealing with, and understanding that on a larger scale, your imagination affects your reality… and coming to this conclusion that we each have the ability to really shape our little section of the world into what we want it to be. And essentially, the whole world is just a collection of those little small worlds; so rather than be so hung up on the condition of the whole world, if we each really took care of our own little pockets of the world, and encouraged others to really make their little pockets of the world a beautiful place, then the beauty would just have to spread and spread.”

Rich with orchestral textures and a choir, Heaven And Earth was in fact recorded loosely and quickly, so skilled and intuitive are Washington and his band. As the saxophonist explains, he almost works backwards, cutting the tracks in one or two takes and then highlighting the best moments with improvised overdubs, strings and other touches. “We’ll spend two hours talking about a song, about what it feels like, what the chords mean,” says Washington, “but then we just play it.

“We play the music differently every night. Me and the guys I play with, we’re very very used to playing new music. We’re very comfortable in the unknown – almost more comfortable in the unknown than we are in the known! Trying to get them to do something in particular is actually kind of difficult, but creating something in the void happens really naturally. I don’t know why we’re that way – I think it’s ’cause we all grew up being the guy in the band who didn’t know the songs but had to play it anyway, haha!”

2018 has seen Washington playing some of his biggest shows yet, including an incredible set at Coachella, which the bandleader rates as his highlight of the year, along with filming the video for Street Fighter Mas. But has it been strange to take his music from smaller clubs to larger stages?

“It’s interesting,” he muses, “I’ve always lived that double life. Even before I was playing a lot of my own music I was always playing with other artists, so I played in those [larger] places with people like Snoop or Raphael Saadiq and Lauryn Hill, so those venues feel normal to me in a sense.

“It’s always a bit surreal when you see that many people coming to see you. I guess I’m just trying to be a steward to the music that comes to me. So in that sense I believe in it, and I always believe that people will believe in it too. I still can appreciate playing a little small place with a few people, there’s a different kind of connection you can get in those kind of places, but there’s also a beautiful feeling of having 2000 people with you, and giving you their energy and you’re giving them your energy. They’re both cool.”

Being such a prolific artist – Washington’s two albums are 173 minutes and 183 minutes long, respectively, and his EPs are the length of most normal albums – means that he has new songs on the way already. Heaven And Earth, such a vivacious, cinematic record, is still in the saxophonist’s blood, however, so he hasn’t dreamt up a concept or theme to connect his new compositions. What comes next from Kamasi could be a surprise, though; after documenting the borders of reality and imagination, he’s burst through any restraints or limits.

“I have some ideas,” he reveals. “I have a graphic novel that I really want to make, and I’m thinking of some musical ideas that can go along with that. We had a show at the Hollywood Bowl and DJ Battlecat was performing with us, and he was backstage just playing all these beats and all this music he was working on. And I was like, ‘Man, I need to sit down with you, because I’m inspired!’

“So I see a few things over the horizon – which direction I’ll end up going in, I’m not really sure. For me to really get to the next thing, I have to let go of the last thing that I did, so that I can get onto the journey of the next one. And I’m still now starting that journey.”