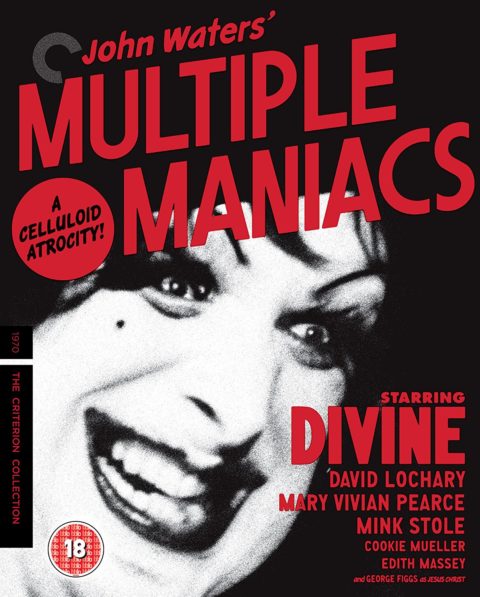 John Waters’ 1970 trash masterpiece Multiple Maniacs is the latest film to be added to the Criterion Collection, which aims to preserve and celebrate the most culturally important films ever made. With a restored version of the film now available on Blu-ray, we spoke to John about making the film and why his work gets better reviews now than ever…

So Multiple Maniacs has been added to the Criterion Collection – how does that work, did they approach you?

“Yes, they did approach me. They have done some of my other films before, I think Pink Flamingos and Polyester were both reissued at one point on laser disc. They’re a class act and the irony of Criterion doing a high-end restoration of a film like Multiple Maniacs on Blu-ray is pretty amazing, because I grew up watching Ingmar Bergman’s various movies released through Janus Films (Criterion’s parent company). But I think Criterion completely understood that irony, because when they restored the film and added the roll credits of the people who did the restoration, they painstakingly imitated the bad quality of the original! So I knew they got it as soon as they did that.”

When was the last time you actually watched Multiple Maniacs? Do you ever watch your own films?

“I don’t, but I had a giant retrospective at Lincoln Center and another big one at the BFI in London a couple of years ago. I think Criterion came to watch at Lincoln Center and the Film Society showed the lost 16mm print of Multiple Maniacs, which practically burned up in the projector. It was kind of like a funeral, because I thought: ‘Well, there’ll probably never be another 16mm print of anything, right?’. But anyway they saw it that night and I think that’s what gave them the idea to do it, so that was one of the few, few times it has ever been shown and that was only because it was part of this giant retrospective.”

What do you make of that film when you look back on it now?

“Well, to me it’s the most ludicrous thing that you can go on Rotten Tomatoes and there’s 100% favourable reviews, when it came out they would be 100% negative. Even I have to laugh at some of them, the reviews are so great and I never got reviews like this for anything! But it’s kind of hilarious when you watch it now, it’s like being in a time capsule. I mean I look back on it now and it’s even more shocking in a way because of the subject matter, the politically incorrect dialogue. So my reaction watching it today is like ‘what the hell were you thinking about?’ It’s no wonder my parents were uptight about it.”

What kind of reaction did you expect when it was first released?

“I knew when it came out it was going to be shocking, I mean we opened it in a church, if you can imagine, and I had three showings which I always did before I targeted distribution, Friday, Saturday and Sunday at 8:00, 10:00 and midnight. They were all sold out, the audience was hippies, punks, bikers, gay people, but all angry, crazy ones.

“So I knew it could work, and then I got distribution for it through this thing called Underground Cinema 12 that played once a week on Saturday nights at midnight, but it went on a tour around the country of the Art Theatre Guild, which mostly did porno, but this was was how they made themselves politically correct in a way, by showing art films at midnight. They paid a dollar a minute, so I got $90 a week and I remember it went to 10 cities, and it went twice on the tour, which was great because I could pay my father back the money he lent me. I mean I’m sure he prayed that I wouldn’t pay him back, so I wouldn’t ask him again. But I did pay him back, and I did ask him again, haha!”

Do you think it would be easier or harder these days to get a film like Multiple Maniacs into cinemas?

“I think it would probably be easier to get a distribution deal for a film like this, I think they’re all looking for the next weirdo film that some kid made on his cellphone, which is basically what we did, except we didn’t have cellphones.”

“It would be easier today to get that film shown than it was then, because back then it didn’t fit in to anything, punk hadn’t happened yet and it kind of was a punk movie before anybody knew what punk was. I didn’t know it at the time, nobody did, but in hindsight you look back and all the people that were in that audience I talked about eventually embraced the punk movement.”

What sort of films or people were you looking to for inspiration when you were making those early films?

“Well, if you look at the posters on the wall at Divine’s house in Multiple Maniacs, that was actually my apartment, that was exactly my living room. So you can see all the posters on the wall of films by Polanski, Bergman, but then also I, A Woman Part II. I used to go see Bergman movies on acid with Divine, haha! I don’t think too many people have watched Bergman on acid, and Divine hated them, he always wanted to see Elizabeth Taylor movies.”

“I went to the drive-in and saw gore movies and all that kind of stuff, but then we went to see all the foreign films like Bergman’s because they had nudity and vomiting and subject mater that nobody had dared to do before. And then underground movies, Warhol movies and the Kuchar brothers especially, so I tried to put all those influences together and I always thought of it as trying to make exploitation films for art theatres, which I think I did do in the long run.”

Divine is clearly the star of the show in this film and has starred in a number of your other films too, how did you two meet?

“Divine and his family moved into my street, I always used to joke that he was the girl next door but he wasn’t exactly next door, he was about six houses away. People always have the wrong impression about what Divine was like, he was an overweight, feminine kid that got beat up every day in school, was going to be a hairdresser, never went out of his house until he was 16. But he used that anger and fear that built up to create this character, he never was transsexual in any way, he never walked around dressed as a woman, he never wanted to be a woman. I always said he wanted to be a monster, and in Multiple Maniacs he became one in the end, he became Godzilla.”