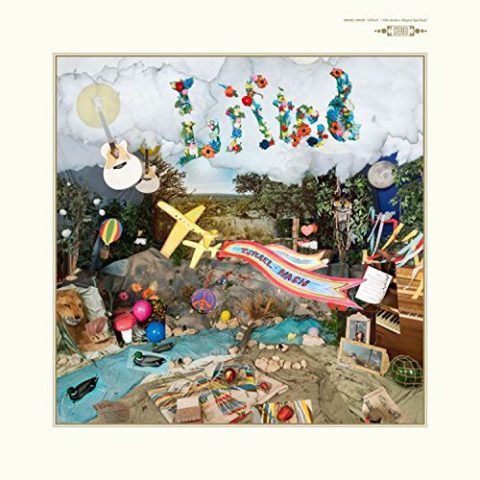 “Truth is such a beautiful thing in this weird, post-factual world”

On the line from Dripping Springs, Texas, cosmic troubadour Israel Nash tells Tom Pinnock all about his new, career-best album, writing on acid and Donald Trump. “This record was born out of incredible distress about the political happenings in our country,” he explains.

It’s the 4th of July when we call Israel Nash on his ranch, and naturally, the singer-songwriter is preparing to celebrate.

“I’m hanging out in Texas, waiting for the heat of the day, and to light up some fireworks,” he says, before adding, playfully: “Don’t let that be a point of contention between us!”

About as far from the unfortunate stereotype of a rural resident of the Lone Star State as you can get, Nash is an open-hearted, spiritually inclined artist, who’s travelled the world and believes he – and America – can learn from communicating with, and embracing, others. That worldview is explored on his excellent new album, Lifted, a lush Americana record that shines a light on some of the darkness of our times.

His direct inspiration, however, comes from the countryside around his ranch, near the wonderfully named town of Dripping Springs.

“I live out here in the Hill Country,” he explains. “When you head out of Austin, you’re basically driving at an incline, just going up for 30 miles. So by the time you get here you can see 20 or 30 miles in the distance, hills just rolling… That contributed to my music so much, seeing open skies and open spaces; it became the visual context for the sonic elements of my record. Texas is definitely a place that’s been massively inspiring for me.”

Those “sonic elements” are everywhere on Lifted, with Nash recording at his own home studio and layering all manner of textures over his music. The songs are traditional in focus, rooted in acoustic guitar and the folk tradition, but his arrangements don’t stick to that style: opener Rolling On boasts electronic handclaps from a Roland 808 drum machine, for example, while tracks like Looking Glass and Sweet Springs feature a gauzy, vague production that evokes the heat shimmers of the Texan high noon. Basically, anything goes – even in the manner of recording, a stark change for a musician who was once an analogue purist.

“I was a big fan of the production of these bigger records, like Sgt Pepper’s Lonely Hearts Club Band,” explains Nash, “records that early on used the studio as an instrument. [But] the old methods can take up some time for creativity, you know? So it’s nice to do that hybrid, where we could do the early stuff on tape, and then I could go in there and add 12 Israel Nash vocal parts afterwards, in the digital realm. I love tape and analogue, but never in life should you be committed to one thing and it’s the end-all, be-all. People that have all the answers generally don’t have all the answers.”

As a result of this freewheeling experimentation, Lifted is laced with strings, horns, synths, drum machines, pedal steel, all manner of keyboards and guitars, and copious echo and reverb. It’s a widescreen sound, as open and spacious as the Texan landscape.

“You really live out in nature for a while and you just see this beautiful connection of things,” says Nash. “I’ve learned to appreciate that trees grow out of the fucking ground – how the hell does that happen? Birds are flying – I can’t do that! I think there are miracles and beautiful things around us, so much that we just take for granted, and it’s helped me see those things.”

Nash hasn’t always been immersed in the countryside that now so inspires him, though – as the title of his 2009 debut, New York Town, suggests, Nash once lived in the Big Apple, moving there from his Missouri birthplace.

“New York changed my life,” he says. “It really started my professional career, I met my band there and my engineer, people I still work with. But once I started having a little bit of success I realised that I didn’t have to be in New York. I feel like I’m not the only songwriter who had this idea of living on a ranch in the country – but artists can enjoy that pure duality. The ranch really gives me a place to really get in myself, I need complete isolation to write.”

In the process of writing Lifted, Nash composed 37 songs, which he then narrowed down to 12 to record with his long-serving band. Writing songs used to mean filling notebooks, but with his own studio the songwriter has been able to demo ideas at the moment of creation – with amps and pianos mic’ed up and ready to go.

“New York Town all stemmed from me sitting with an acoustic guitar, while some of the songs on Lifted are like, ‘Oh, I happened to pull up a drum loop that’s 170bpm, and then I just started playing chords.’ And that’s Lucky Ones!”

At the forefront of Nash’s mind during this writing process, unsurprisingly, was the political situation in the US.

“This record was born out of incredible distress about the political happenings in our country, mainly Trump getting elected. It was a point of real despair for a lot of people – I’m an artist, all my friends are artists or associated with that. [But] if people can change other elements of their lives personally, then that’s how these things change – it’s understanding that people are people, it’s not having a fear of strangers or of someone who looks different from you. I am so thrilled to realise just how much music plays a role in bringing people together.”

If this all sounds a little serious, then fear not, Nash leavened the recording, and the result, with a dose of more playful behaviour. For one, there was ‘the crazy table’, a set of unconventional percussion instruments, including glasses of water tuned to different notes; for another, there was the songwriter’s use of psychedelics to transform his music.

“I wrote Looking Glass during a nice little acid trip,” he reveals. “You can only write songs on an acid trip towards the latter part, otherwise you have songs that have a hundred chords in them…”

Lifted is subtitled ‘File Under Hippie Spiritual’, too, something of a tongue-in-cheek, self-effacing nod to the deeper, more existential matters covered within. “How do I word this in a way that has some lightness to it?” Nash says of his thinking. “Because I don’t want people to think I’m trying to preach something, I’m not asking people to get out their crystals or their tarot cards.”

With his finest record so far about to be released, Israel Nash is already working on his next one in Dripping Springs. Some musicians appear fully formed, while others take time to develop, and right now – five albums in – Nash seems like an artist at the top of his game. What’s more, he seems to know it, too.

“Early on in my career, I realised, ‘I don’t wanna make the same record every time.’ I wanna grow… And I think that just having the studio and having more instruments, more time to create and work on stuff, has been inspiring to me. I think I’ve been able to keep growing, working for a new prize.”