Fopp Album Of The Month – This Is The Kit – October 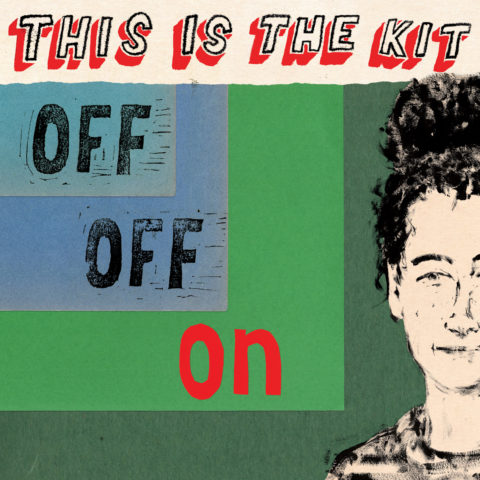 Artist: This Is The Kit

Title: Off Off On

We are delighted to select folk collective This Is The Kit as this month’s Fopp Album Of The Month.

“Yes, I’ve definitely been enjoying the process. It’s been keeping me going!”

When did you start work on the songs for this album? You’d been out on tour with The National, so did it start then?

“Some of the songs on this album I started writing back in 2018 when we were still touring our last record, Moonshine Freeze. Some of them were only finished just before we went into the studio early 2020, and some of them got written when I was on tour with The National in 2019. Some would see this as quite a long writing period. I’m a slow writer.”

How did you want this album to move on from what you did on Moonshine Freeze?

“With every album I always hope for growth and change, but I never know how it’ll happen. I guess that’s kind of where Josh Kaufman, who produced the new record, came in. His musical guidance opened things up and brought in different approaches and sounds.”

You finished the record just in time for lockdown, was it a race against time?

“Not really. I was kind of oblivious. The recording had always been planned for that week. We were in a studio bubble concentrating on recording. We were reading the papers a bit every day, but we had no idea the world was about to shut down completely.”

“I guess we were too focused on the task at hand. Then we finished the recording and all went home. and then that’s when everything slammed shut. We were really lucky that we were able to get the album recorded and that no one got stranded in the wrong country.”

You did the album with Josh Kaufman, how did that collaboration come about?

“I’d met Josh a few times here and there and he’d played guitar with This Is The Kit a couple of times. We both took part in a few of the 37d03d residencies in Berlin and Brooklyn and every time we’d worked together it felt really natural and highly enjoyable. I was well chuffed

that he was up for working on the album together.”

What did he give you as a producer?

“He brought in a lot of fun and different sounds and ideas. A lot of keyboard and organ and piano stuff which was really nice. Also some beautiful guitar lines. And general guidance of the parts that the band and I had come up with. Precision decision making and wise choices made with a finely tuned ear. He just made everything better.”

“I’m only now really uncovering the themes that are in it. For me, it’s only after an album is done that I start noticing the patterns and reoccurring ideas. I think I can see a fair bit about responsibility. Of ourselves and of others and of our actions in the world. Where, when and how we choose to use our energy and our time. Empathy. Patience. Action. Perseverance. Hope.”

“That was definitely ‘Coming To Get You Nowhere’. For a long time it just sounded like a theme tune to a police cop action series from the 1970s. Which was hilarious in the studio, but not completely the desired final effect.”

“We worked on it quite a bit over the following weeks. Me and Josh sending each other different suggestions or tweaks. We also sent it to a friend in New York called Adam Schatz. He’s a superstar musician and has an amazing band called Landlady that I suggest everybody listens to right now. He added some synth parts and tenor sax and really helped sort the track out. He saved the day.”

“I guess the quickest was maybe ‘Shinbone Soap’ as it was just me and a guitar playing along to the rhythm from an electric organ that was in the studio. We got it in one or two takes. Josh was pretty certain right away that it was one to leave space on and not get too carried away with overdubs. In the end the only additions were a spot of keys from Aaron Dessner. But other than that it was left pretty much as it was performed in the studio.”

When did you settle on Off Off On for the title? Were there any other titles in contention?

“I think quite early on. But it’s always a bit nerve racking announcing that sort of thing to people. There’s the dreaded moment of reaction when it could all go wrong. There were a few other possibilities, but ‘off off on’ was the most fun to say out loud so that was the one

Are you able to make any live plans at the moment? Or are you looking towards 2021?

“Well, at the moment, it’s a case of booking in gigs for the future when you hope touring will be possible again, and then rescheduling when the dates approach and it turns out it’s not possible yet. An eternal game of book it and then nudge it.”

“My heart really goes out to all of the independent venues and promoters and events organisers out there who are hanging in there the best they can but whose livelihood is getting destroyed. It’s horrible. We have to really rally together and do what we can to look after each other.”

“The time France was locked down from mid march to early june was pretty intense. No leaving the house for more than an hour. Mind you, everything was shut and everyone was scared to go out and spread the virus so not many people did actually leave their homes. And not going further than a kilometre from your home.”

“That felt like pretty dark times. I didn’t really feel able to write. It was just an exercise in not losing your marbles and also trying to stay healthy without being allowed outside. That lockdown I spent doing PE with Joe Wicks and mixing the album.”

“I’ve been working to prepare the album release and trying to find new ways to make contact with people for the release in these times of not being able to do in store shows or any gigs.”

“I really miss being with audiences and playing and attending gigs. I really miss my band and I really miss touring. But life goes on and everyone is having to learn to adapt and change how they do things.”

“Once the album is out and things are a bit less busy I’m really hoping to carve out some writing time. There are a lot of projects I’d like to be getting on with and a lot of friends I’ve been wanting to make some music with. And if I can’t tour then at least I can initiate some correspondence course style collaborations. We shall see..”