album of the month – wet leg 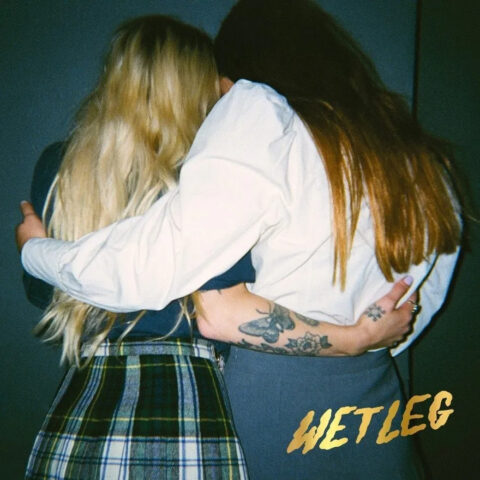 Unless you’ve been living under a rock for the last 18 months it’s almost certain that you’ve heard at least one song by Wet Leg – probably their so-viral-it’s-unavoidable hit ‘Chaise Longue’, a sassy, minimalist ode to life in a band that launched a wave of internet hype and saw them quickly develop into one of the UK’s buzziest bands.

No-one is more surprised than the band themselves. Formed in college by Rhian Teasdale and Hester Chambers – almost on a lark, to hear them tell it – the pair quickly found their songwriting stride and have since built a band around them who are already gaining a reputation as a fearsome live act, even though their rapid rise throughout the lockdown months limited their opportunities to gig as much as they would have liked.

Instead the band have gained attention through a series of videos and online session, including an impressive set on Later… with Jools Holland, while crafting and recording their self-titled debut album, which makes its keenly-awaited arrival in stores this Friday (April 8).

Ahead of its release we fired some questions at Rhian and the rest of the band to find out how they’re handling the hype, their highlights of a whirlwind year, and why they’re not taking it for granted that there will be demand for a follow-up album…

We’ve been really looking forward to your debut album – how are you feeling now it’s almost ready to be unleashed?

“Ah we’re sooo ready for it to be out. It’s been ready for so long! We started recording it about a year ago so we’re very excited to have it out there. There’s been a lot of noise around us, like a lot of weird “will they live up to the hype?” sorta questions coming at us so it’ll be nice to just have it out there yunno…”

You’ve generated quite a buzz with your early singles – were you surprised by the reaction you’ve had to the songs you’ve released so far?

“Absolutely. We just started the band as way of keeping music in our lives even though we were both very much on another path with our jobs. We’d both given up on trying to do anything with music but we started Wet Leg as something to do as and when we could in hope that come the summer, we could wangle a few festival tickets by trying to get slots at the festivals we wanted to go to anyway.

“So yeah, everything on top of that has been so so unexpected. It’s so surreal to find ourselves on this adventure. The reaction to our singles has been so brilliant. My favourite thing is when people come to our gigs dressed as the characters we create in our music videos. So cute and funny. We love to see it.”

What have been your highlights of all that over the last year?

“There have been so many highlights over the last year I don’t know where to start. We’re in the van on our way to a gig so I decided to ask the rest of the band and the couple of crew we have with us today, Karima (front-of-house) and Ben (monitors). They’ve been with us on this journey since the very beginning. We’re a pretty close knit group now. A weird little family.”

Hester: “The best thing is being on a weird and unexpected adventure with pals. Also watching Dolly Parton at SXSW. Wow. Also the tour bus.”

Rhian: “Making loads of new friends in music. Nashville was pretty fun to see. I think we’ve broken the world record for the most Greggs vegan sausage rolls ever eaten. So that’s pretty cool.”

Ellis: “It’s been good times all the time, being on a big sleeper tour bus in the US for the first time was a pretty huge deal for me, young Ellis woulda thought old Ellis is cool as butts. Also seeing Bill Murray in the flesh was straight-up wild and a dream.”

Joshua: “Dunno, there’s been so many highlights it’s difficult to pick one. The radioactive colour of Orange Fanta in America. Chatting to Finn Wolfhard, he’s really nice.”

Karima: “Watching the band take on every new challenge with grace and humour… and the dog lounge on the ferry.”

Ben: “Discovering the Reece’s Pieces chocolate bar. Or when Bill Murray handed me a $100 bill and said: “Buy the band a beer”.”

Henry: “Iggy pop saying that my foot is beautiful and getting to play at Brixton academy was cool.”

What kind of music did you bond over when you first started playing together? Were there any reference points for the kind of music you wanted to make?

“We met at college when we were 16 and 17 so some of the music that we would have bonded over would have been from that kinda time when indie and this kinda nu-folk / freak folk thing was going on. I remember being obsessed with, Alt-J, The Dirty Projectors, Little Dragon, Devendra Banhart, Jessica Pratt, Laura Marling, The Maccabees, Bombay Bicycle Club, James Blake, Joanna Newsom. But then I guess at the same time we would have also been listening to stuff like The Strokes, The White Stripes, The Black Keys, Black Rebel Motorcycle Club…”

How does the songwriting process usually work between the two of you?

“We don’t have a set way but because if lockdown we kinda were forced into making scuzzy demos individually ‘til practice rooms opened up and we could get back in and play together. Sometimes we’ll just leave a phone running in a practice and pick out the best bits after. Hester will be messing about on the drums and I’ll be playing something dumb on guitar and probably singing something even dumber. And that’s how you make a hit, kids.”

How far back do the songs on your debut album go? What were the earliest ones you wrote that made it onto the record?

Have any lyrical themes emerged on this album, do you think?

“Yeah, it’s so funny to have the whole album there and realise what its recurring themes are. Disenchantment is big one. Being sad at parties. Oh and there are a few tunes that came about after a big break up, so there’s some cathartic, post break-up dis songs on there too.”

You’ve been working with Dan Carey (amongst other producers) on your debut – how did that connection come about? How was he able to help in a creative sense?

“He’s worked with a lot of bands that we love including Squid and Fontaines DC. I can remember reading about his studio and about his label Speedy Wunderground a good few years back and being like ‘woah this guy is cool af’ so it was completely wild to get to make an album with him. He is cosmic.”

When did you get finished recording it all? Did you end up with a lot of material?

“We finished recording it end of April 2021 I think. So about a year ago. Yeah there are a couple of bonus tracks that you can get with the special edition vinyl and then there were a couple of tunes that we just put down midway through recording, but I’m sure we’ll pick them up again at some point.”

Have you been able to play most of the album live yet? Or have you been holding some of it back?

“Yeah we’ve played all the songs on our album live. We approach some of the songs a bit differently though so that they slot into our live set better. I love how the album sounds and I wouldn’t change it for the world. I’d say we kinda made the album in a bit of an unconventional way. By that I mean that because of lockdown, we weren’t able to go and ‘test’ any of our songs by touring. We just went straight into recording them which was cool and not something we’ll ever get to do again I don’t suppose.”

You’ve got some tour dates coming up in the UK, where else will that be taking you? Anywhere you’re really looking forward to?

“Bristol. I used to live there and it always feels like going home when we get to play there.”

Are you thinking about your next record yet? Or is too soon for that?

Wet Leg is available now in store on cd & lp