Album of the Month – James 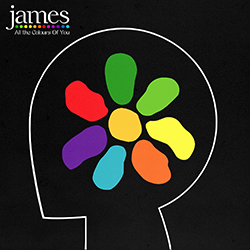 Title: All the Colours of You

own it on cd, deluxe cd, vinyl & limited edition half black/half red vinyl

Few of the bands that emerged during the indie wave of the early 90s have enjoyed the kind of longevity – or indeed ongoing chart success – that Manchester stalwarts James have managed to maintain since their first breakthrough hit ‘Sit Down’ became on the decade’s biggest anthems.

Aside from a brief hiatus in the mid-2000s the band have been going strong for nearly four decades now, turning in no fewer than 15 studio albums, the most recent of which arrived in the form of 2018’s Living in Extraordinary Times – a title that seems almost alarmingly prescient given the events of the past year or so.

Despite the pandemic, James haven’t used the downtime to take a break and have once again been hard at work in the studio crafting their sixteenth full-length offering.

All the Colours of You arrives in 4th June and ahead of its release we caught up with Jim Glennie, the band’s bassist and its longest-serving member, to talk about how they put together their new album in lockdown…

So, album sixteen! That’s quite a number. Did you ever imagine when you started out that you’d have that many records in you?

“James are celebrating the band’s 40th anniversary next year. Can you believe it? We just keep going and going like the Duracell bunny. We are already planning writing sessions for album seventeen.”

When did you start working on this one? What was the first song that kicked things off?

“The first writing for this album was done in a big house in the Yorkshire Dales back in July 2018. The first song we came up with was ‘Isabella’ or as it was first known; ‘Yorkshire Day 1, Jam 2’.”

We understand that the album was partly recorded before everything went into lockdown – how far along were you?

“We managed to get all the writing done pre-Covid, which was lucky as that’s the bit we can’t do remotely. The songs had started to be formed into demos already, so we were trying to push things forward and whittle down the number to a sensible short list of contenders.”

You’ve worked with Jacknife Lee on this album – how did that partnership come about?

“We needed a producer and Jacknife lived just down the road from Tim in Topanga Canyon, California. Jacknife wasn’t busy, he liked the demos, so hey presto. Very fortuitous.”

How did you manage the process of recording the album with him working remotely?

“Tim was our point person. Representing our wishes to Jacknife and Jacknife’s ideas to us. Things went surprisingly smoothly, thank the Lord.”

What was he able to bring to the table as a producer?

“Jacknife has brought out the lightness in the record. It’s groovy and uplifting. Sometimes the lyrics are dark but there is always hope and positivity.”

Has this ended up being a different sounding album as a result of making it the way you did?

“That’s hard to say. Quite possibly. I’m hoping we can do another album with him and maybe be a little more hands on.”

What sort of album is this from a lyrical point of view?

“Tim’s lyrics always cover the things that are impacting his life. He was living in the States, so the troubles over there are reflected. Covid obviously has made its presence felt too.”

When did you settle on the title for the album? Sometimes there’s a song that sets the direction for the record as a whole – was that the title track in this case?

“Pretty much as you’ve said. The track ‘All The Colours Of You’ kind of sums up the record. I think it’s a good example of the writing and production direction we took with this album.”

Live events are slowly starting to become a reality again, have you been able to plan much yet in terms of touring?

“Fingers crossed our first gig is on the 24th June. It’s been a long and difficult road. We haven’t played live since September 2019, which is a crazy thought.

“We have more festivals through the summer and our own arena tour in November. We even have a few gigs abroad penciled into the band diary. All very exciting.”

Finally, you’ve had a few albums reach No. 2 in the charts… is this going to be the one that gets you to the top?

“Ha Ha!  Always the bridesmaid. I don’t know to be honest. We just keep plugging away and doing our thing. If not now, maybe next time …”