Album Of The Month – Goat Girl 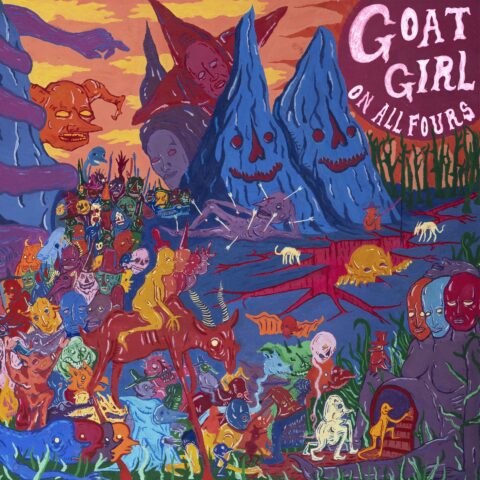 Title: On All Fours

on CD & vinyl plus get FREE signed fanzine

We are delighted to select Goat Girl’s new album On All Fours as this month’s Fopp Album Of The Month.

We spoke to the band about the making of the album…

It’s a very odd time to be releasing an album, how have you found the experience of getting ready to put the record out?

“It’s surreal not to have played the majority of the tracks on it live, so it’s hard to gauge how people will respond to it. It feels like a lot of work without the release of doing what we really love, which is getting together and playing music. We’re trying our best to remain positive and think of ways to use the time wisely, before we can head out and gig again.

We’re chuffed with how the singles have gone down so far! We’re making the best of a strange situation and ploughing on with life the best we can. It’s an incredible feeling to record and release music – and this remains untarnished!”

You recorded in early 2020, did you finish it before the lockdown or have you been tinkering with it during the rest of 2020?

“We actually recorded it in 2019 and it was mastered before lockdown so no tinkering at all.”

How did you want this album to move on from what you did on your debut record?

“I don’t think we were entirely sure at first. We toured our first album so extensively that it took a few months to just get into the swing of writing again. However, with Holly joining on bass and bringing an exciting fresh energy (and a whole load of cool synths and pedals to the mix), we soon became inspired by synths and electronics, more so than on the first record. We’ve all progressed as musicians from the first record, where a lot of our playing was pretty raw and amateur, the second album owes it’s fresh sound not only to more zealous use of electronics, but also an evolution of our personal musical playing styles, technique, knowledge, and time.”

You did the record with Dan Carey, who also made your debut record, why did you decide to go with him again?

“Since meeting Dan he’s become a good friend of ours. We never actually discussed making the second album with him, it was just assumed.”

“Like Holly said, getting someone else to produce was out of the question. One of the reasons we were excited to work with him the first time round was because of his knowledge of synths and electronics, which runs strong through most of his work. I think it’s safe to say that the two weeks we spent recording the album with Dan is one of the best two weeks ever, we never wanted it to end. He’s a special guy with a genuine lust for music.”

What does he give you as a producer?

“Mad production skills and cool synths etc aside, Dan has a magical power for bringing out the best in people and that’s something you put a price on”

“Not intentionally, but it reflects the world we see around us at the present, so the topics discussed are bound to be thematic to some degree. We have all struggled with our mental health, and so we’ve used On All Fours both as an expression of our inner, personal struggles, and as a therapeutic tool to cope. There is also social commentary which will probably be ever-present in the music that we make. I’d say we have reflective minds, so we often read into the things, and pose questions that will hopefully ask the listener to expand their mind, ease anxieties, or insight joy.

There are a couple of songs that are specifically about the decrepit state of the earth, how humans are destroying it (The Crack, Badibaba). However, these songs also aim to reconnect the listener to nature, and a sense of greater community, as members of the earth.”

“Easily ‘Once Again’. It started from a silly Logic demo that Holly made that had a strange bass line and spooky piano chords. Ellie wrote a melody to the chorus and we knew there was something there but it was such a pain in the arse to finish. It went through so many structural, instrumental and even lyrical changes to reach the point it’s at now but we got there in the end.”

“Probably ‘Jazz (In The Supermarket)’. It came from a slightly unhinged jam when we were writing/refining things at Dan Carey’s second Mr Punch Studio in Streatham in the summer of 2019. We had a date to record the album and we thought we had most of the tracks already so we were just trying things out and having fun. We initially thought of it as a bit of a joke but when our friend Holly Whitaker popped by she was really into it and we started to take it more seriously as a song that could be on the album. The final version came together super quickly though.”

When did you settle on On All Fours for the title? Were there any other titles in contention?

“We settled on it at Dan’s house, just after recording the album.”

Are you able to do much planning for the second half of 2021? Or are you waiting and seeing what happens?